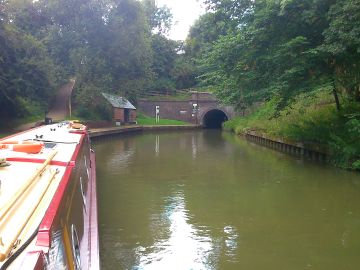 The current tunnel is the second attempt to cut through Blisworth hill. The original, begun in 1793 collapsed during construction, with the loss of 14 of the workforce. The tunnel was finally completed in 1805 after seven years in construction. Major rebuilding work was needed in the 1980s, this time using boring equipment and reinforced concrete rings - technology which was then used for the Channel Tunnel.

The tunnel is 3076ft (2813m) long and can allow two narrowboats to pass. It is the third-longest currently navigable in the UK (the ninth-longest canal tunnel in the world).